On this page you will find photos of the progress of the new School building which opened in September 2015. 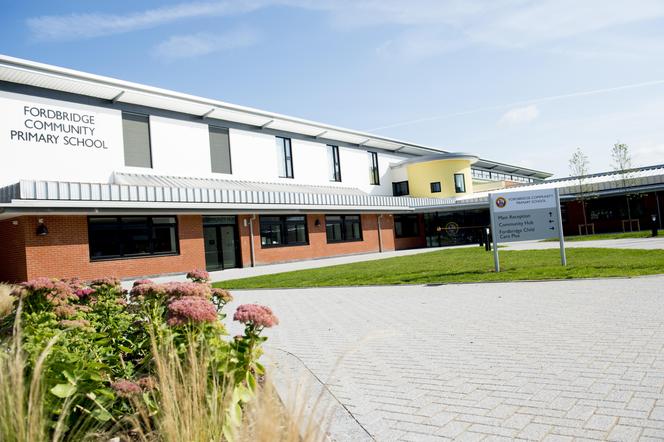 The building of the new Fordbridge Primary School started in June 2014 and was completed in July 2015. A series of progress photos can be found on pages within this area of the website.

The school is a fantastic building and offers great facilities for the pupils, parents and local  community. The staff are delighted to be able to work within this lovely building and equally, the Governors  are very pleased with the new Fordbridge School.

Inevitably, as with any new building, there are still some minor works to be undertaken throughout  the course of the coming year. Most of the work will be carried out during holiday periods to minimise disruption to the education of the children.

Please enjoy looking at the photographs of the school,

taken at the beginning of the Autumn Term  2015.

By comparison, there are photos showing the

in with the NEW!!

Time has passed very quickly since Christmas and fantastic progress has been made on the new school site. The Contractors, Morgan Sindall, are on schedule and expect to complete the new school by the end of June this year. Plans are currently being made to arrange the move from the old school to the new. Details of all the arrangements will be sent out once everything has been confirmed.

The school has a User group made up of members of staff, governors and representatives from the local community. This group meets on a regular basis to discuss how the facilities at the new school can be used by groups within the locality.

A survey of parents showed there was an interest in providing a Youth Club; Homework Club; a range of activities for families, including health, sports and fitness opportunities. Interest was also shown in having  people available to support families with issues such as debt management.

The school would value support and input from different agencies and local people who could help to offer a range of opportunities  for children, parents and the community. There are a number of community spaces/rooms available for meetings, social gatherings and activities, as well as a large Multi Use Games Area for sporting activities/events.

If you know anyone who would be interested in using the facilities at the new school, or if you would like to run an activity yourself, please contact the School Office for further details.

Progress on the Fordbridge Site October 2014

Progress on the Fordbridge Site September 2014

Visit of Mayor to Fordbridge Site

September. The Lady Mayor was asked to 'Sign a Beam' that was going to form a part of the school roof.

A number of children from the school also had the opportunity to add their names to the beam, so

ensuring they become a part of the history of the new building. Each class, from Y1 to Y6, were

represented at the event.

Visit of the Mayor of Solihull

During the afternoon of Friday 12th September, the Mayor of Solihull, Councillor Kate Wild, will be visiting

the new school site.  The Mayor will be 'Signing a Beam' which will form a part of the structure of the new

A pupil from each of the classes, from Year 1 to Year 6, will be joining the Mayor and signing the beam,

members of the Northern Schools Programme Team, will also be in attendance at the event as will

A photographer will be taking lots of different pictures, some of which will be added to this website.

We also hope there will be an article in the local press an on the Solihull Council website.

slide show. We think you will find it interesting to see how the  builders work on a project such as building a

Fantastic progress has been made!!!

Local residents may attend from 6p.m. and other interested groups, such as the building contractors, are

An agenda for this meeting will be added to this website in due course.

However, in the meantime, further details can be obtained from Ellen Delaney, who is in Fordbridge

All the children attended a special assembly on Tuesday 8th July. This was organised by Morgan Sindall

with a view to making all the children aware of the dangers associated with building sites. First of all,

the children were told about the new school site by Mr. Lee Dobb, the Project Manager and he then

This was all made much more exciting though when Ivor Goodsite made an appearance!! Ivor helps children

to look, listen and understand about the hazards that can be found for anyone who goes on a building

site!!! All the children loved seeing Ivor Goodsite  and one lucky child had her photograph taken with him

after the assembly had finished!!!

The lucky young lady in question was Bethany Aish from Year 3!! Bethany had won a competition when she

was in the Infants and had designed a slab which is to be used in the grounds of the new school. Bethany

got to hold her slab and show it to Ivor, making sure she didn't drop it on his toes, of course!!!

The children in Year 5 were set the challenge, following this assembly, to design some Health & Safety

posters to be put up around the new school building site. Once again, it was difficult to choose from some

very good entries but an overall winner was chosen from each class. The winners were:-

These two children each received a small prize and were awarded a certificate. It is hoped that these

pupils will be taken to visit the school site in the Autumn Term.   Other children who had their work

children who had their artwork chosen for display around the building site . 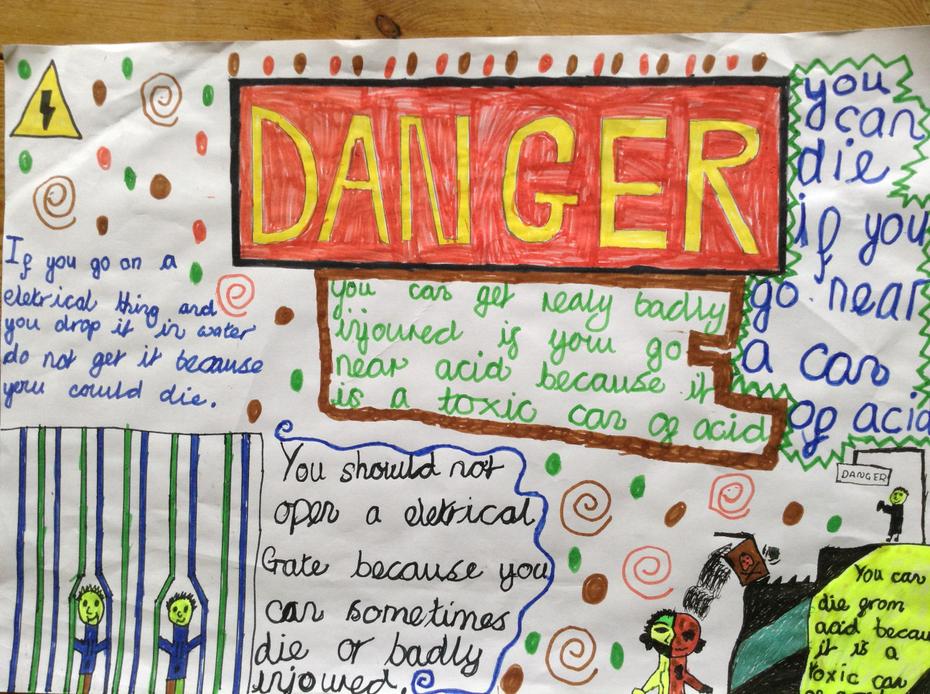 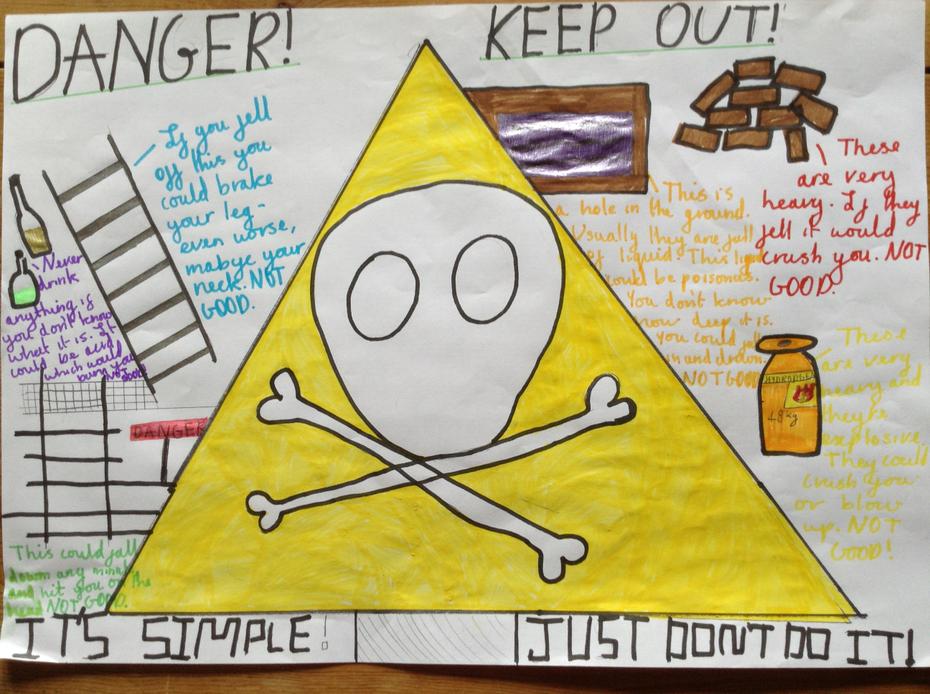 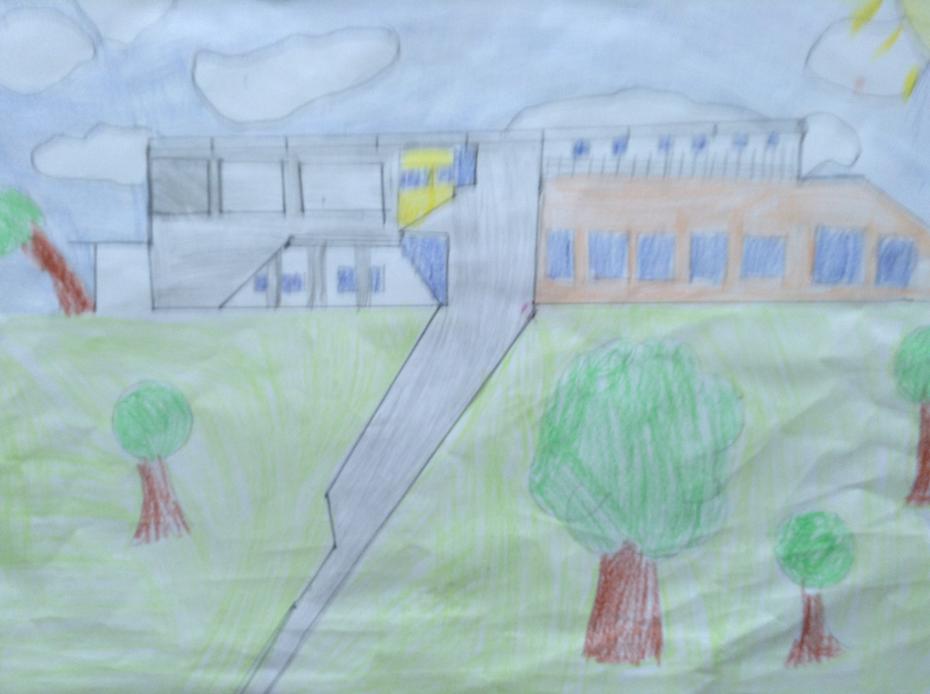 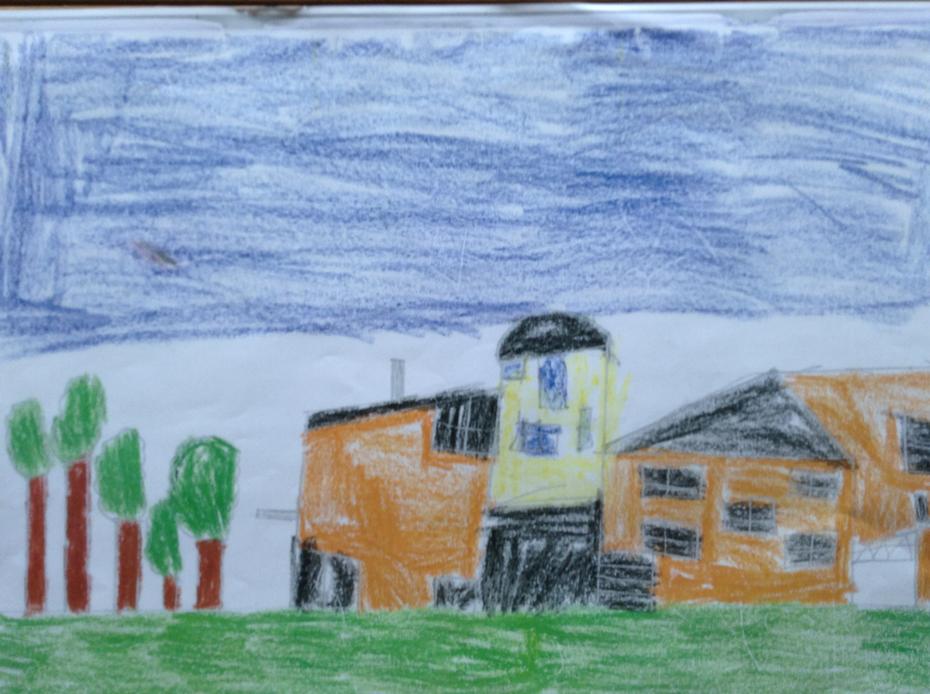 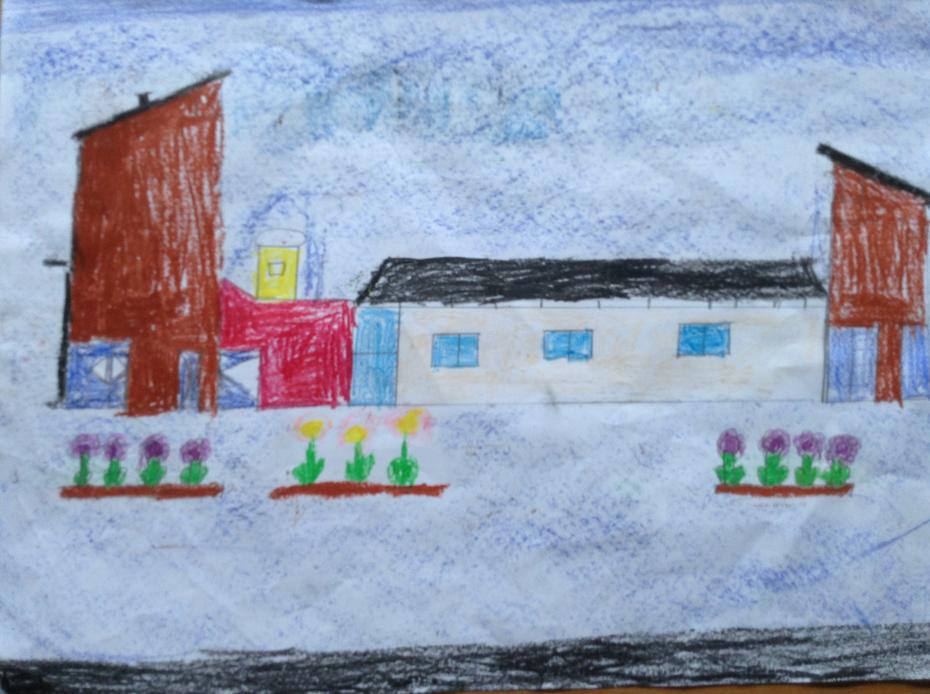 The contractors, Morgan Sindall, started work, on the former Bennetts Well site, in June. Access to the

site has been via Crabtree Drive, for deliveries and via Woodclose Road for staff and visitors.

The main focus of the work to date has been to construct roads on site; undertake a lot of ground works

and to deal with issues relating to drainage. The frame of the building is due to be started mid August,

after foundations have been laid.

the children to take part in.

An art competition was arranged for the children in Year 4. Their task was to draw their impression of

what their new school is going to look like. Children who had their artwork selected have had their work

displayed by the new school site. So go along and have a look at their splendid pictures!!!

In addition, all the children received a certificate but there had to be some overall winners!

Three children, one from each class in Year 4, were chosen as winners and they were:-

The three lucky winners received a small prize, as well as their certificates, but best of all, they went

to see the new school building site. The children were each given a safety helmet, high-vis jacket, gloves

and safety specs. A visit to the site offices gave a great view of the site and then, a seat in a digger,

gave them a feel of an on-site view!!!! The children met Mr. L. Dobb, the Project Manager for

Morgan Sindall and were accompanied by Mr. Fletcher and Mrs. Dickie.

The construction company, Morgan Sindall, have been working closely with Solihull Authority, preparing for the commencement of the build programme.

Letters were sent out to parents, members of the local community and the Town Councils in April, setting out a preliminary overview regarding how the Project was developing.

A copy of that newsletter is attached below.

In addition, Morgan Sindall will also be sending out regular newsletters to people living adjacent to the former Bennetts Well site.

Contact details for the Project Manager and Site Manager can be found on this letter, which is also attached below.

There are regular meetings held by the 'Community Action in Fordbridge' group. These are either held at the Bosworth Centre or Crabtree Hall.

The meetings are generally held once a month and give local residents an opportunity to plan events for the area, or tackle issues of concern. Members include local councillors  and people who represent a variety of groups working within the locality.

I will include the dates of future CAFÉ meetings on this site from now on.

There is a meeting taking place next week on Thursday 12th June, at the Bosworth Community Centre, starting at 6.30 p.m. for residents and from 7.00 p.m. for other interested parties.

Morgan Sindall will be at this meeting to meet the local community and talk about the building of the new school.

Please feel free to join the meeting this evening or any others being held in the coming months.

Building Given The Green Light!!!

The contractors are currently involved in preliminary preparations, before moving onto the former Bennetts Well site, to begin construction.

A newsletter, giving further information, will be sent out to pupils, parents, staff and the local community, in the near future. A copy will be included on this website page.

WATCH THIS SPACE FROM NOW ON!!!!

Exciting times are ahead.

Five contractors were selected from firms that expressed an interest in building the new Fordbridge School. All submissions from these firms have been subject to a detailed review during the past few weeks.

The five chosen submissions have now been reduced to two preferred contractors and work is currently being undertaken to make the final decision concerning which company will be awarded the contract.

It is anticipated that the contract will be awarded early in January and that will then be subject to approval by the Cabinet in Solihull Council. Building Work is expected to begin on the Bennetts Well site after this approval has been granted.

The whole process does require time but it is anticipated that the school should be built by Easter 2015. It will be a fabulous facility for the children and community of Fordbridge!

Wishing you all a Merry Christmas and a Happy New Year.

Architects Illustration of Plan of Grounds

My name is Mrs. Sue Dickie and I work as School Liaison Adviser for both Fordbridge and Coleshill Heath Primary

My role requires that I act as a link between the Local Authority, the architects and the schools as part of the 'Primary

to the building of the new Fordbridge School.

An overview of the recent and forthcoming events:

There has been recent work taking place on the former Bennetts Well site. The former base and foundations

of the old  school have been dug up, along with other areas. The rubble created by this work will remain on

site to be used as part of the foundations for the new building.

If you have questions or queries, I can be contacted via the School Office or by e-mail on :-

Unfortunately not the ones with chocolate chips.

Some cookies are necessary in order to make this website function correctly. These are set by default and whilst you can block or delete them by changing your browser settings, some functionality such as being able to log in to the website will not work if you do this. The necessary cookies set on this website are as follows:

Cookies that are not necessary to make the website work, but which enable additional functionality, can also be set. By default these cookies are disabled, but you can choose to enable them below: